How to Use Twitter Lists to Grow Your Followers, Influence 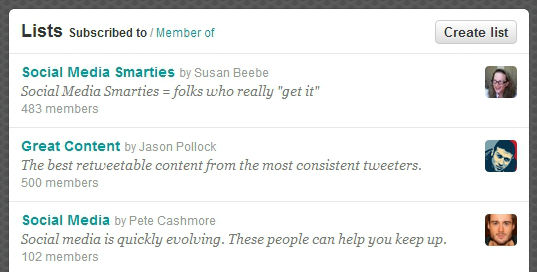 Lists are curated groups of Twitter users that allow you to segment the people you’re following into groups based on interests or relationships (i.e.: clients vs. family members). But while many Twitter users simply create lists to organize their streams, that’s just scraping the surface of their potential.

Unless set to private, Twitter lists are visible to the public, which means you can see which lists your competition has been added to and/or is subscribed to, you can see who others in your field think are worth following, and you can determine if there is a list void worth filling.

Here are some suggestions on how to grow your Twitter followers and influence using lists.

Create
You can create your own lists by clicking the gear icon drop down menu in the top right navigation bar or by going to your profile page and clicking on ‘Lists.’ Click ‘Create list,’ enter its name and short description, select if you want the list to be private (only accessible to you) or public (anyone can subscribe to it), and save it. Then, visit the profile pages of the users you’d like to add to your list, click the gear icon drop down menu, and select ‘add or remove from lists.’ A pop-up will appear displaying your created lists. Check the lists you would like to add the user to. A user can create up to 20 Twitter lists, and each list can contain up to 500 members.

Remove
It’s possible you may find yourself added to a list that you don’t want to be associated with. To see which lists you’re a part of, go to your profile page, click on ‘Lists’ and then click on ‘Member of.’ Blocking the list’s creator will remove you.

Mine
Check out lists that are created by and/or followed by people you consider influential. Do the same Tweeters keep popping up in multiple lists? Consider following and engaging with those people, as they are likely thought leaders in your field.