Twitter Analytics: A Great First Step, But We Want More 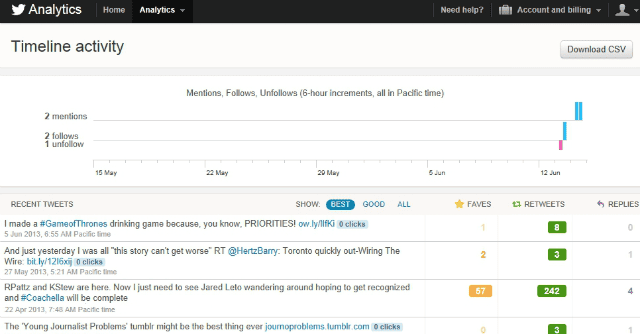 Twitter recently made analytics available free to all users, not just those who paid for their advertising services. Tucked away in the Twitter Ads Dashboard, you can now access a summary chart displaying your mentions, clicks, retweets, follows and unfollows.

The “Timeline Activity” page allows you to download a CSV report from a set time period for a maximum range of 90 days. You can also sort your tweets by engagement using the “best,” “good” and “all” tabs.

The “Followers” page breaks down your growth and displays your followers by their demographics, including geographical location, interests and gender. Also, there is a section that displays which users your followers follow.

Though free Twitter analytics are a long time coming, it’s not completely bug-free yet.  We’ve been unable to access any data on the “Followers” tab and all of our tweets are displaying “0” clicks, even though referral traffic indicates otherwise.

Opening up free Twitter analytics is a great first step, but if Twitter wants to compete with other free tools, it should expand its offering. Third-party analytics platforms such as Twitonomy allow you to track by keywords and hashtags, while Tweriod tells you the best time to tweet. Also useful would be a list of the top influencers who retweet your content. Let’s hope a deeper dive into our timelines’ analytics is on Twitter’s roadmap.

Twitter said in a statement, “We’ve been experimenting giving the analytics feature to a small group of users outside our advertising clients. We’ve been happy with the response thus far, and will determine next steps after the conclusion of these tests.”

The Power of First-Party Data and How to Utilize It

A Guide to Retargeting, Remarketing, and Gathering Data

How to Reconnect with your Customers Post-Pandemic on Social Media