The Pros and Cons of Getty Images’ New Embed Feature 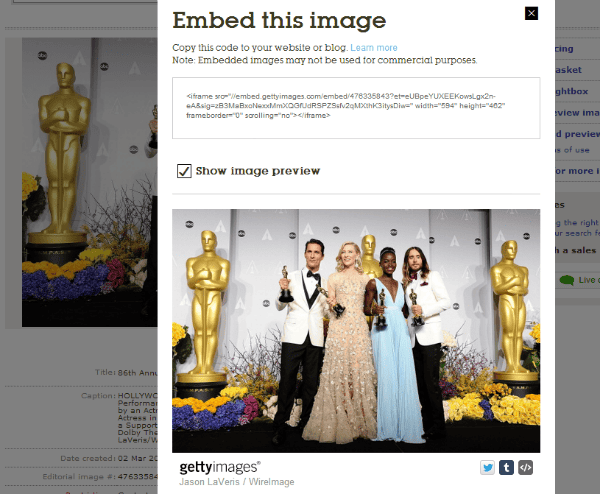 Earlier this week, Getty Images made a surprising and welcome announcement: the world’s largest photo agency was opening the floodgates to allow bloggers to embed the bulk of their images for free. Previously, the Seattle-based company charged for its images (and the price was considerably steeper than many of its competitors).

The change was prompted by the widespread and unauthorized use of the agency’s images online. Getty is hoping the embed feature will curb this practise and capture value from those who were previously stealing imagery.

“Look, if you want to get a Getty image today, you can find it without a watermark very simply,” Craig Peters, a business development exec at Getty Images, told The Verge. “The way you do that is you go to one of our customer sites and you right-click. Or you go to Google Image Search or Bing Image Search and you get it there. And that’s what’s happening… our content was everywhere already.”

The new feature allows people to embed non-watermarked images on their websites, such as WordPress blogs and Tumblr, for non-commercial use. The images will include a link back to the Getty Images website, the photographer’s name, the collection’s name, and icons for Twitter, Tumblr and embedding.

For bloggers with a limited budget who have depended on free Creative Commons imagery, this is huge news. Here’s a look at the pros and cons of using Getty Images’ new embed feature.

Though Getty’s new feature may not solve everyone’s image requirements, this is still great news for budget-constrained bloggers looking for high-quality imagery, especially as the web becomes more and more visual.