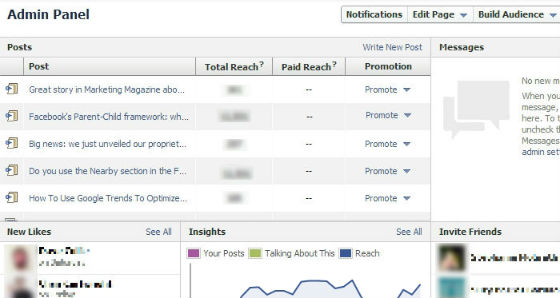 Page admins who logged into Facebook this morning were greeted with a revamped administration panel, with the ability to pay to promote your most recent posts now front and centre.

The new panel showcases your pages’ five most recent posts and their total reach (i.e. – the number of people who saw the posts, split up by organic and paid), along with a button that allows you to easily promote any of those posts. Previously, you had to scroll down to each individual post on your wall to select this option.

The new Posts panel replaces the Notifications panel (which showcases your recent fan activity such as likes and comments). Notifications have now been moved to a button on the top right of the page.

This appears to be the latest move by Facebook to encourage page admins to spend money with the site, paying to promote their posts so that more of their fans (and the friends of those fans) will see them.

That’s not the only change happening with Facebook’s paid social elements today. Facebook also appears to be playing around with the wording of “Promoted” posts. Several page admins have noticed different phrases being used to encourage admins to consider a social strategy that includes paid media. We at Reshift are now seeing the phrase “Get More Reach” instead of “Promote,” while others are seeing “Boost Post” and “Advertise Post.”