Why Local Businesses Should Care About Twitter’s New Nearby Feature 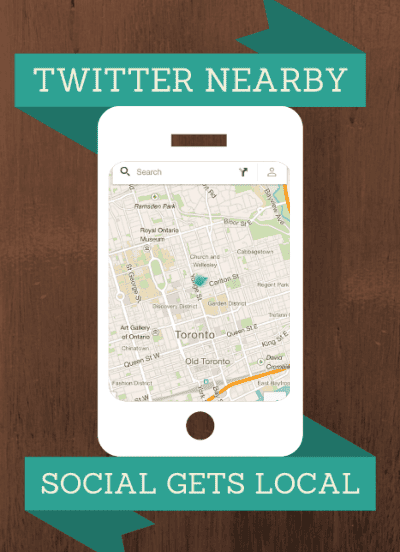 In this blog, we’ve talked extensively about Facebook’s recent emphasis on local activity and how it can benefit small businesses. Now it looks like Twitter is jumping onto the local bandwagon with its recent introduction of Twitter Nearby.

Twitter Nearby lets mobile users see what’s been posted around them, regardless of whether they’re following those tweeters or not. The feature, which was quietly rolled out in limited release last month, seems to suggest the social network is trying to be more locally relevant. The ability to search for nearby tweets is already available in Twitter clients such as Hootsuite and Tweetbot, but Twitter has only now begun to experiment with it in its official mobile apps.

In order to take advantage of the feature, users need to enable Twitter to add their location to tweets. The option is turned off by default, but you can enable it under your phone’s Location Services settings.  A select group of users who turn on the location feature will see a Nearby tab in their Twitter app that allows them to discover what’s being tweeted around them.

According to screen shots from the Wall Street Journal, the Nearby tab displays a map showing the user’s location, much like Foursquare. Beneath it is a list of tweets that have recently been posted in that neighborhood, with icons on the map indicating where the tweet was sent. Clicking on each icon will display the individual tweet.

What implications does Twitter Nearby have for small businesses?  Consider the following: